Recently, painted Conquest Miniatures French and Indian war (FIW) French regulars. One can also say that FIW was a part of 7 years war fought between England and France in America. Conquest Miniatures has small, some say incomplete range of miniatures, suitable for recreating "Last of the Mohicans" in 28mm scale.

Figures are very nice, well sculpted and cast. Almost no flash, thick belts and details. Fun to paint. Bayonets are well sculpted and durable for gaming, IMO. Some of the command figures come with separate hands for dramatic poses. 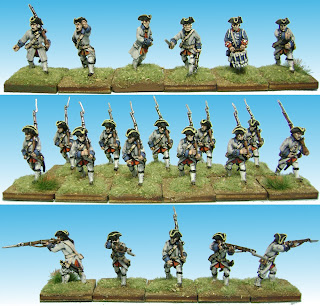 By the way, color of the French coats is still a great debate among historians, re-enactors and miniature painters. I used several paintings depicting this regiment, I think La Reine, as sources. In some coats looked more white, in some more grey. In all paintings I noticed that leggings were whiter than coats. Therefore I decided that coats should be light grey. I also thought that white coats would become grey during rigours of campaign.