This is the first time I painted miniatures from a company called Askari Miniatures. Well, almost, I painted 1 figure before. Below is the figure of Abd El-Krim, Arab resistance leader from North Africa. I used Google image for colors and made light blue threads in his coat slightly larger to be visible on wargaming table.

I also painted Egyptian diggers that are suitable for many scenarios. As you can see the sculpts are rough, but came out pretty well after painting. 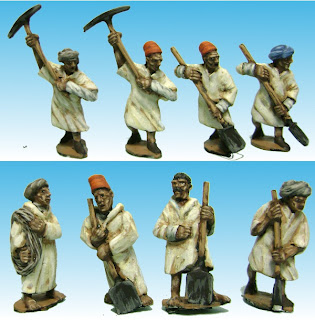 Figures are 28mm and fit with any existing popular ranges produced now.
Posted by IGWARG at 9:44 PM No comments: 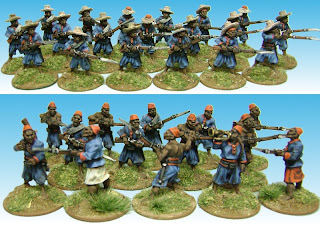 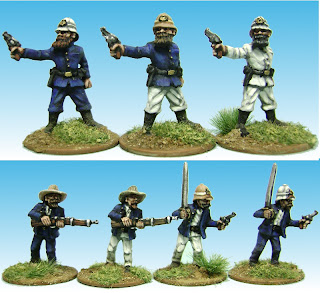 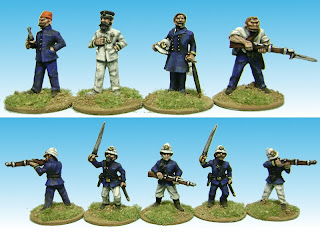 ﻿Figures were cast very well with some flash here and there, easy to clean. Some mould lines here and there, nothing that file or paint brush couldn't fix. Sculpting was very painter friendly with well raised details. I only had problems with painting eyes. Eye sockets were very deeply set with very large bulging pupils. That made very hard for me to paint whites of the eyes and I gave up after few tries. I painted most of the eyes with just a black dot for African troops and brown dots for white officers.
Posted by IGWARG at 8:42 PM No comments:

Welcome to my blog. This is my first post and I thought it would be appropriate to show some of the first toy soldiers I ever had when I was a kid. Those are 54mm plastic semi-round or semi-flat soldiers and came from the set called "Battle of the Ice". If I remember correctly they used to cost 1.10 rubles and the average monthly salary was about 120 rubles.
First available in late 70's and contained 10 Russian medieval soldiers in red and 10 Teutonic soldiers in green. Each force was composed of 3 cavalry and 7 infantry figures. This was first and only time Soviet toy soldiers industry ever made "enemy" forces. All other sets of toy soldiers for any period only depicted Russian or Soviet warriors. This particular set is not totally historically correct as most Teutonic miniatures are from 15th century and battle of the ice happened in 13th century. Russian soldiers can plausibly be from the 13th century and because Russians were more conservative in their equipment can be historical for 15th century as well.
Two types of sets were produced. In both sets Teutonic miniatures were the same, but in one set Russian soldiers had slightly different armor and shield designs. In the late 80's this set was also made in silver for Teutonics and gold for Russians. I have silver/gold set now, not original green/red set from my childhood.
I will paint the rest of them soon, just follow my blog. If you have this or other sets of miniatures made in Soviet Union, especially that different set of Russian warriors, please let me know, I may buy those from you or trade with you.