I was fascinated with India from the childhood when I watched lots of colorful Indian and Soviet movies and cartoons based on Indian fairy tales. Indian/Soviet film "Ali Baba and 40 thieves" made in late 70's or early 80's as well as Soviet made "Maugli" and 'Golden Antelope" cartoons are probably the best examples. Recently my interest in India was renewed when I read Osprey "Moghul" title with FANTASTIC illustrations by Angus McBride. Another very good book about Moghuls with lots of colorful illustration of original Indian and Persian paintings is "Storm Across Asia" - published in 1980 by HBJ press and part of "Imperial Visions The Rise and Fall of Empires" series.

I had an opportunity to be one of the first to paint minis from very new company - Indus Miniatures: http://indusminiatures.mybigcommerce.com/categories/WAR-IN-INDIA-%252d-28mm/
One of the reasons I was attracted to this company was because it looks like Ashok will have the complete range. The reason for buying this cavalry first was because they wear helmets that were only found in India.

Below is painted Maratha cavalry command pack. Marathas were confederation of Hindu kingdoms in central India during 17th or 18th century. Nevertheless the figures can be used for late middle ages as well and for any kind of native Indian cavalry. All the command cavalry in this pack have "mirror" armor introduced by Persians and Indian style helmets resembling Indian style turbans. All have metal arm protection for the right sword arm. Commander is holding all steel axe and all figures have shields slung on their backs. Standard bearer came with cast on lance that was too delicate and bendy. I cut it off and glued one of the extra standard poles I had from some other company, I think Perry miniatures. I found the flag on the Internet. 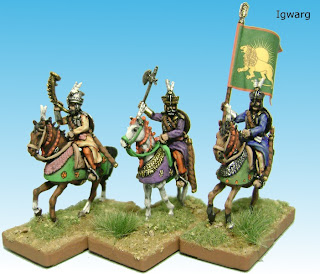 Another pack contains 3 different cavalry swordsmen. I bent the arms a bit to create different poses. I painted all the shields as steel, but they can also be any other color. 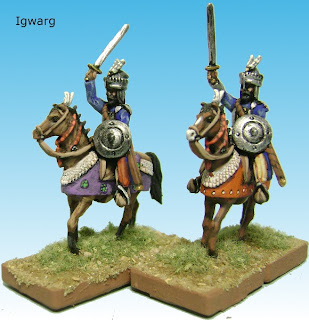 The pose below had it's arm stretched all the way to the side. I found it impractical for ranking up and transporting. Therefore I bent the arms of both miniatures. 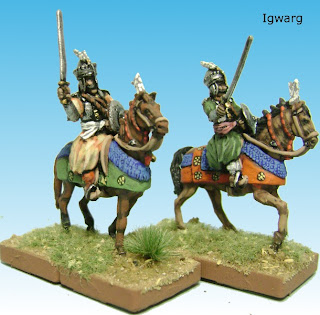 Below is another pose from the 3 figure pack. As you can see all the figures are almost identical, only differ in some costume details, shields and sword arms. There are 2 slightly different horse pose having the same type of armor or decoration. 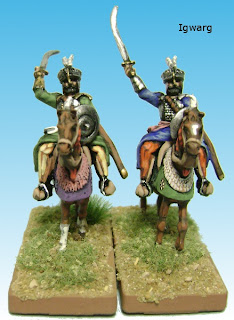 Overall figures are very good. They remind me of Perry miniatures or GW Lord of the Ring metal figures. Proportions are generally good, horses are a bit flatter then I am use to. Riders fit on horses fairy well, better front to back than side to side. For all I know it was done on purpose to simulate Indian riding style. All the weapons and shields are cast on. One thing I didn't like were cast "flower studs" dots on horse armor. That kind of forced me to paint them. I would prefer flat surface and my own choice of decoration. Also, those "studs" were not raised but depressed and that was difficult for me to paint. I also simplified horse armor paining as there is no limit on how elaborate and colorful it can be. 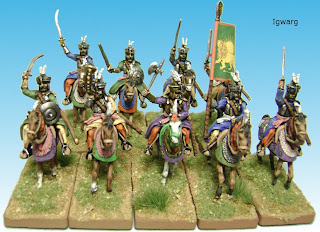 Medieval and Renaissance Indian armies were mix of Turko-Mongol, Afghan and Indian styles. I am planing to use my Timurid Persian miniatures alongside Indian miniatures. Below are size comparison between other manufacturers and Indus miniatures. 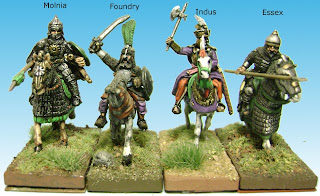