For a long time I was collecting Mirliton medieval figures. The idea was to make late 13th or early 14th century force that can work for Flemish, German or Italian city states. The common feature of all of those armies was reliance on city militias for the troops. Most of those would be infantry. Mirliton makes excellent minis that fit the bill. There is a lot of variety in poses and in armor that other manufacturers don't make. One can buy miniatures in groups or individually. Figures come with variety of shields, halberds and spears. In this case I decided to give figures below long spears or pikes. I made my own spears from florist wire as cast spears provided by Mirliton bent very easy. All of the figures below came from Mirliton's Italian city militia range. 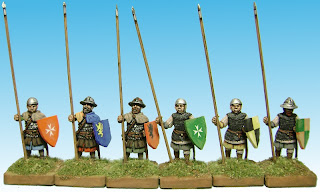 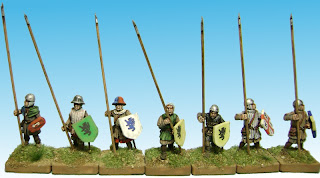 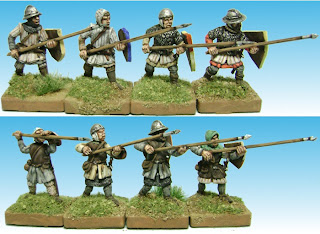 As you can see there is lots of variety and some of the same sculpts were painted slightly different. Models with spears held horizontally were given shorter spears so it's easy to rank them up and position against enemy units.

There are also some very useful figures in Mirliton Catalans range. They all appear to be heavily armored infantry. I do not know why they called Catalans and why all Catalans are heavily armored. They are great for generic first rank infantry that all countries of that period had. It's Mirliton's older range and the figures are closer to 25mm than 28mm. 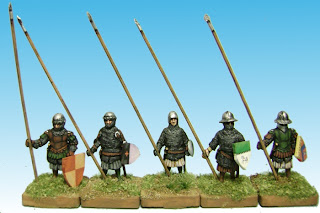 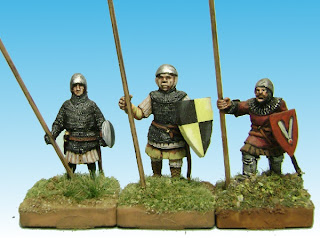 More comparison below. Mirliton city militia on the edges and Foundry 14th century spearmen in the center.

Mirliton communal militia figures are complex and not easy to paint properly because of detailed armor of the warriors. They are well sculpted though and were fun to paint. They are great for late 13th and the whole 14th century, any kind of infantry of Western Europe.

Finally, just a bit of extra. I also have late 15th century army for War of the Roses etc. Below is a comparison between 2 less well know manufacturers of the period and Foundry. Mirliton 14th century (good for 15th century as well) Italian spearmen is on the left, Parkfield Burgundian and Swiss figures are in the center, Foundry is on the right. All those are closer to 25mm. 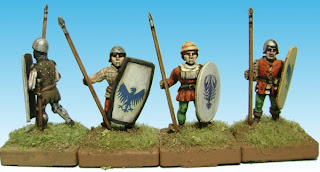